The First Fridays Devotion, also called the Act of Reparation to the Sacred Heart of Jesus, is a Catholic devotion to offer reparations for sins and which had its origin in the apparitions of Christ at Paray-le-Monial, France, reported by Saint Margaret Mary Alacoque in the 17th century. This devotion to the Sacred Heart was fully approved by the Roman Catholic Church and several promises were made by Jesus to those who practice the First Fridays Devotion, one of which included final perseverance.[1]

According to the words of Christ through His apparitions to Saint Margaret Mary Alacoque, there are several promises to those who practice the First Fridays Devotion:

"In the excess of the mercy of My Heart, I promise you that My all powerful love will grant to all those who will receive Communion on the First Fridays, for nine consecutive months, the grace of final repentance: they will not die in My displeasure, nor without receiving the sacraments; and My Heart will be their secure refuge in that last hour."[2]

The devotion consists of several practices that are performed on the first Fridays of nine consecutive months. On these days, a person is to attend the Holy Mass and receive the Holy Communion.[3] If the need arises, in order to receive Communion in a state of grace, a person should also make use of the Sacrament of Penance before attending Mass. In many Catholic communities the practice of the Holy Hour of meditation during the Exposition of the Blessed Sacrament during the First Fridays is encouraged.[4]

Promises of the devotion to the Sacred Heart of Jesus 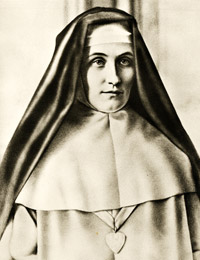 The Blessed Sister Mary of the Divine Heart was a nun from the Congregation of Our Lady of Charity of the Good Shepherd who asked Pope Leo XIII to consecrate the entire world to the Sacred Heart of Jesus.[6]

In 1889, Pope Leo XIII permitted priests and bishops worldwide to offer one morning votive Mass of the Sacred Heart on the first Friday of each month in churches or oratories where special devotions to the Sacred Heart were held, provided no feast of the Lord, double of the first class, or privileged feria, vigil, or octave occurred on that day.[7] This permission was retained in the 1962 Missal, which remains the authorized liturgical text for the extraordinary form of the Roman Rite under the terms of Pope Benedict XVI's Summorum Pontificum, though the rubrics were altered to restrict the use of this permission to first Fridays on liturgical days of the third and fourth class; additionally, the 1962 rubrics allow two such votive Masses to be said on first Fridays, with no requirement for these Masses to be said in the morning (evening Masses having been permitted by Pope Pius XII by his 1953 apostolic constitution Christus Dominus).

No specific permission for use of the votive Mass of the Sacred Heart on first Fridays exists in the rubrics of the Mass of Paul VI, though votive Masses of any kind are permitted on most weekdays in Ordinary Time on which no obligatory memorial, feast, or solemnity occurs.