The First Saturdays Devotion, also called the Act of Reparation to the Immaculate Heart of the Blessed Virgin Mary, is a Catholic devotion which, according to Sister Lúcia of Fátima, was requested by the Virgin Mary in an apparition at Pontevedra, Spain, in December 1925. This devotion has been approved by the Roman Catholic Church. 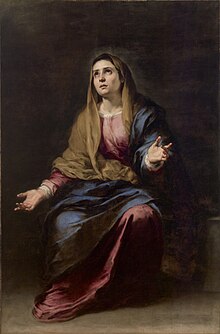 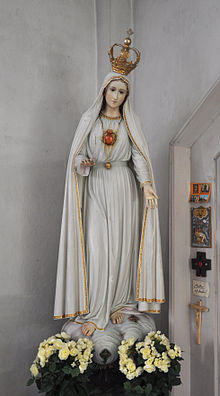 A religious statue depicting Our Lady of Fátima, with her Immaculate Heart surrounded with thorns, a necklace chain of golden ball (of light) and barefooted as described by Sister Lúcia at the Pontevedra and Fátima Marian apparitions.

The pious practice of honoring the Blessed Mother on Saturday is an ancient custom largely attributed to the Benedictine monk Alcuin (735-804), "Minister of Education" at the court of Charlemagne, who composed a Votive Mass formulary for each day of the week. Alcuin assigned two formularies to Saturday in honor of Mary. The practice was quickly adopted by both clergy and laity.[1]

The practice of reparation to the Immaculate Heart of Mary on the First Saturday was initiated in Rovigo, Italy, by Mary Inglese, a Servite tertiary in 1889. She started among her friends the pious practice of "Communion in Reparation to the Immaculate Heart of Mary". The practice was endorsed by Bishop Antonio Polin of the Diocese of Adria and was taken up by sodalities throughout Italy and elsewhere.[1] On July 1, 1905, Pope Pius X approved and granted indulgences for the practice of the First Saturdays of twelve consecutive months in honor of the Immaculate Conception. This practice greatly resembled the reported request of the Blessed Virgin Mary at the Pontevedra apparitions.

Inglese wished to establish a religious congregation dedicated to the apostolate of Marian reparation. Bishop Tommaso Pio Boggiani recommended that she join the Servite sisters, known for their devotion to Our Lady of Sorrows. She joined the Servites as Sister Mary Dolores in 1911. She and foundress Mother Mary Elisa Andreoli revised the rule, making propagation of Communion of Reparation on the First Saturday of each month the congregation's main apostolate. They also changed the name of the group from "Servants of Mary" to "Servants of Mary of Reparation". The sisters also published a monthly magazine that helped spread the devotion throughout Europe.[2]

Sister Lúcia later reported that on December 10, 1925, the Virgin Mary appeared to her at the convent in Pontevedra, and by her side on a luminous cloud was the Child Jesus. According to Lúcia, Mary requested the institution of the Devotion of the Five First Saturdays in reparation to her Immaculate Heart:

Look, my daughter, at my Heart encircled by these thorns with which men pierce it at every moment by their blasphemies and ingratitude. You, at least, strive to console me, and so I announce: I promise to assist at the hour of death with the grace necessary for salvation all those who, with the intention of making reparation to me, will, on the first Saturday of five consecutive months, go to confession, receive Holy Communion, say five decades of the beads, and keep me company for fifteen minutes while meditating on the fifteen mysteries of the Rosary.[3]

Such sorrow is particularly bitterly endured on Holy Saturday after Jesus was placed in the Sepulchre (before the Resurrection on Easter). Devotees of Fátima believe that the First Saturdays help to console the sorrows of God, Jesus, and the Virgin Mary for the sins against her Immaculate Heart.

The Act of Reparation

When Sister Lúcia experienced the Pontevedra apparitions regarding blasphemies against the dogmas of the Perpetual Virginity, the Divine Maternity& the Immaculate Conception. The Blessed Virgin promised special and great graces, especially at the hour of death for salvation of believers, who for Five Consecutive First Saturdays of Month (5 Saturdays in 5 months) receives Holy Communion and practices the following exercises as an Act of Reparation to the Sacred Heart of Mary:

The confession can take place within eight days before or even after the Holy Communion is received, but the Holy Communion shall be received with dignity, in a state of grace, keeping in mind the Real Presence of Jesus in the Eucharist through transubstantiation. The intention of making reparation to the Immaculate Heart of Mary may be kept to oneself; it is not necessary to notify the confessor or presbyter.

The Holy Communion has to be received within the 24 hours of the first Saturday of the Month. Attendance to Holy Mass is optional. Receiving Holy Communion as part of this devotion must be consciously intended as an Act of Reparation to the Immaculate Heart. The devotee need not tell anyone else, but keep it in mind. To avoid omitting the Intention every Saturday, the General Intention for the devotion of the Act of Reparation can be mentally or outspokenly stated before starting the First Saturdays (or in between).

If a person has a valid reason not to attend Mass (Masses not available on Saturdays, difficult mobilization, other major event), the devotee may consult a priest about receiving Communion privately or on another day with the intention of making this Communion as part of the devotion.