A RELIGIOUS AWAKENING – THE POWER OF THE ROSARY:

In 1867 Father Luc Desilets, the pastor at Cap-de-la-Madeleine from 1864 until his death in 1888, had an astonishing experience.  Upon investigating a noise he had heard in the church, he found a small pig chewing on a rosary.  This was for him a shocking experience. He was saddened by the fact that people were no longer praying the rosary.  He remembered the Confraternity of the Holy Rosary that had been established in the parish in 1694.  He then consecrated himself to the Blessed Mother and vowed to spread enrolment in the Confraternity of the Holy Rosary wherever his voice could be heard.  Soon more and more parishioners started coming to church; eventually the church was too small and a larger church was required. By 1954 the Old Shrine, now considered the most important Marian Shrine in North America by the CCCB, welcomed One Million pilgrims to celebrate the 100th Anniversary of the proclamation of the Dogma of the Immaculate Conception of the Blessed Virgin Mary.

It all began with "One Vow" by one man. A vow that echoes to this day and calls us to help build the "Bridge of Rosaries" in our time... Enrol in the Confraternity "HERE" As Pope Leo XIII said in his apostolic constitution on the Confraternity, "whenever a person fulfills his obligation of reciting the Rosary according to the rule of the Confraternity, he includes in his intentions all its members, and they in turn render him the same service many times over." (Ubi Primum (1898), n1) St. Louis de Montfort was ordained a priest in June 1700. He had a great desire to go on foreign missions. In fact he showed great interest in the new French colony of Canada! His spiritual director advised against it. In November 1700 he joined the Third Order of the Dominicans and asked permission not only to preach the rosary, but also to form rosary confraternities.

St. John Vianney once said, “If anyone has the happiness of being in the Confraternity of the Rosary, he has in all corners of the world brothers and sisters who pray for him.”

1985 Letter from the Master of the Dominican Order on the Confraternity. 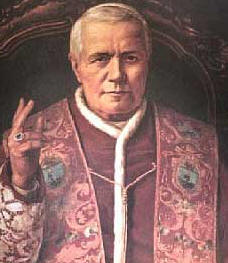 “The Rosary is the most beautiful and the richest of all prayers to the Mediatrix of all grace; It is the prayer that touches most the heart of the Mother of God. Say it each day!” 1

“Amidst all prayers, the Rosary is the most beautiful, the richest in graces, and the one that most pleases the Most Holy Virgin.” 2

1 Cf. Msgr. J. Cirrincione and T. Nelson, The Rosary and the Crisis in the Faith, Tan Books and Publishers, p.34

2 Quoted in Spiritual Will of St Pius X, quoted in fraternitenotredame.org/Pages/EN_Pages/ChurchTexts/EN_CTx-Pope&HRosary.html